In March of 2016, I wrote an article about the parallels between my experience living in the United States through the corrupt Cheney and Bush years and living through the escapades of Lula and Dilma while here in Brazil. Since that time, enough has happened in Brazilian politics to make the writers of House of Cards jealous.

Brazil is shadowing the United States once again, but this time in regards to the 2018 presidential election; it is proving to be one of the most divisive contests in recent history. As we inch closer to election day on October 7, each political tribe stands ready to go to war.

To put this into context, since I have been here in Brazil, I have seen both Obama and Dilma elected twice. And while those elections were certainly heated, they did not bring out the viciousness and passion in people like Trump and Hillary did in America nor how the current crop of candidates (led by Jair Bolsonaro) has brought out in people here. 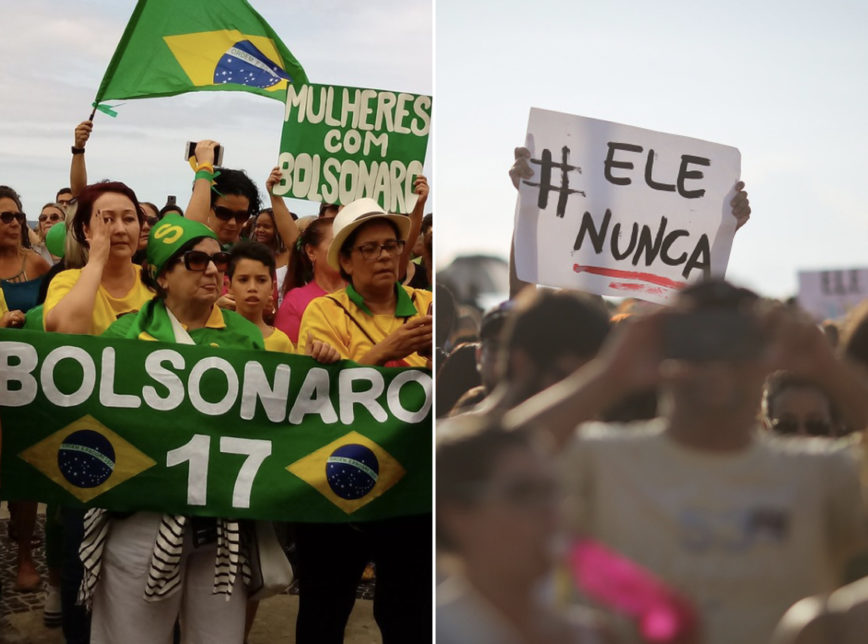 Just this past weekend, for example, we had numerous anti-Bolsonaro and pro-Bolsonaro rallies across Brazil, gathering tens of thousands as they marched for their cause. While campaign rallies are commonplace during election cycles, spontaneous marches in support of a candidate or ideological stance are certainly not.

Something to note is that much like with the anti-Trump rallies in America, anti-Bolsonaro rallies did not include fervent support for any opposition candidate to Bolsonaro (although there were plenty of #FreeLula signs). Their main message was #elenão (not him) or #elenunca (never him).

I believe this is a reflection of the population´s lost faith in the establishment. The candidates with the strongest chances for defeating Bolsonaro are part of the political machine that Brazilians are exhausted of, much in the same way Clinton was for Trump.

Even the usually strong PSDB (Democratic-Socialist Party of Brazil), who has either had one of their own as President or in the second-round of each presidential election since 1994, barely made waves with this year with their nomination of São Paulo governor, Geraldo Alckmim, to the highest office – he remains in single digits in most polls.

In addition to this, there is a high level of rejection of PT (Worker´s Party) after 13 years under their rule. This can be evidenced by the fact that they went from the party with the third most sitting mayors in 2012 down to the tenth after the 2016 municipal elections, that’s a nearly 60% drop!

The irony is that PT, for many, had been the anti-establishment party.

I know many folks who today identify as conservative or classical liberals who admit to voting for Lula – even Bolsonaro has said he did as such in the second round. The criticism from these people is that PT eventually transformed into exactly what they said they were fighting against: a corrupt establishment party.

This rejection has resulted in two things which drive this election. One, the Brazilian electorate has flocked to a wild-card like Bolsonaro to clean up Brasilia as Trump promised to do during his campaign. And, two, the left has attempted to become even more progressive, much like Hillary tried to become in order to appease some of Bernie Sander´s flock.

Furthermore, just like Trump and his supporters played the “rise of socialism” card against the Democrats last American election cycle, the doubling-down of progressivism here in Brazil is fodder for Bolsonaro and his followers who claim that another four years of PT rule will result in a socialist or even communist regime, ala Cuba and Venezuela.

Former São Paulo mayor Fernando Haddad (PT),  with the blessings of former President Lula, has appeared as the principal foil for Jair Bolsonaro. This adds yet another element of similarities between American and Brazilian politics.

First some backstory for those who do not know. This year Lula was jailed for his involvement in a bribery scheme. However, his supporters believe his arrest was politically motivated.

However, Lula (along with Dilma, who leads the Senate race in Minas Gerais despite her impeachment) have built enough of a cult of personality to transcend their party´s and their own failings. In fact, while Lula was still appealing his sentence and his name appeared on presidential polls, he was in first place by a wide margin. Many people may not believe in his party anymore, but they certainly believe in him.

Lula´s appointment of Haddad to run in his place for PT has catapulted the former mayor above 20% in the polls despite his being a relative unknown outside of the city of São Paulo. This has created two distinct scenarios: one, where Lula´s followers are backing Haddad off of Lula´s word alone thus helping him gain popularity, and two, where people who had fought hard to stop PT (via the successful ouster of President Dilma) have turned fearful that the party will return to power thus bolstering Bolsonaro’s popularity.

While Ciro Gomes, a self-proclaimed left-center candidate, has been polling strongly in third place, bets are that Haddad will be the prime candidate to square off against Bolsonaro in the second round. This will create as much (or more) of an ideological schism as Trump versus Hillary. 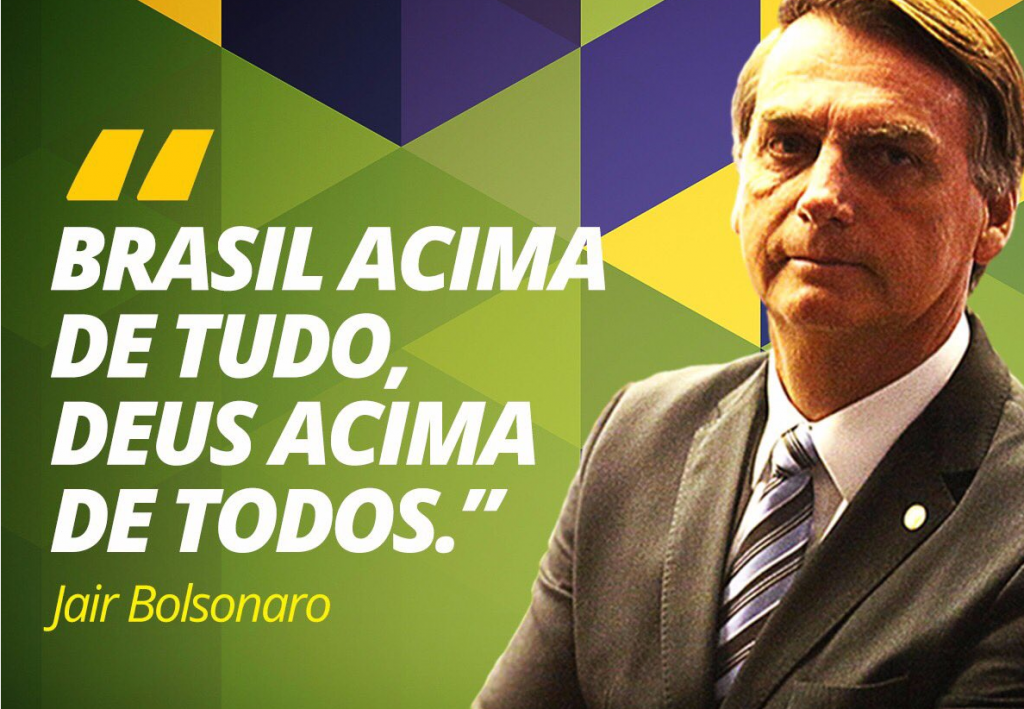 But even without this duel between left and right extremes, the drama surrounding this election can be traced back to one distinct source, Bolsonaro himself. He has dropped like a bomb onto the national consciousness, although those who have kept up with politics know that his star had been rising for decades.

He is an ardent religious conservative with a love affair with the “good old days” of Brazil´s 21-year-long military regime. He is the living antithesis of everything Brazil had been living under for the last 13 years during the PT government. And, like President Trump, he is best known for his unfiltered comments and unpredictability, as well as a myriad of accusations of being homophobic, racist, sexist, and any other pejorative of which one can think.

While it´s true that Brazil´s more extreme electorate love to cry “fascist” at any candidate that doesn´t include a good amount of red in their party logo, Bolsonaro is seen as a more tangible threat and driven left-militant groups into a frenzy.

Beyond that, like the crop of influential Republicans in the United States who repudiated Trump at first, the traditional opposition parties to PT in Brazil (PSDB mainly) have also not fully backed Bolsonaro´s run for President despite Haddad having the clearest shot at reaching the second round of voting and potentially winning the Presidency. Although, there are exceptions like the recent support for Bolsonaro by one of the founders of PSDB.

So with all these considerations and more, Brazilians await for Sunday, October 7 with a lot to consider. If the vote does indeed move to an October 28 second-round vote (some analysist believe Bolsonaro has a chance of taking it in the first round), it promises to be a mean and fiery back and forth between Bolsonaro and his antithesis, Haddad. Sound familiar?

This fervor will be due to both sides playing for more than just policy stances. Rather, they both believe they need to “save” the country from impending doom. Sound familiar, part deux?

Whichever way the vote goes, both men will certainly have to deal with relentless attacks for the next four years, with their respective supporters taking the brunt of the beatings.

Meanwhile, moderate supporters (or those who support neither candidates) will have to sit and listen to the crying from both sides. So, if you are currently living in Brazil as an expat, may your heart be strong and the caipirinhas and beer flow steadily, you are going to need it.

Read about why it is PT is such a hated political party by clicking here.

Read my review of The Mechanism, a Netflix original series that is inspired by the Brazilian Lava Jato corruption scandal by clicking here.

For something lighter, check out contributor Jeremy and I´s ranking of The Halloween movies by clicking here.

Check out a cool place for a quick getaway in São Paulo, Pico de Jaraguá, by clicking here.

Check out my review for The Glass Castle: A Memoir by clicking here.

2 Responses to “It´s Like Déjà Vu All Over Again” … All Over Again – How Brazil´s 2018 Presidential Election shadows America´s 2016 Election.