Ranking the Friday the 13th Movies: Phil and Jeremy go over all 12 films with a little help from our friend Justin.

Friday the 13th is one of the highest grossing and most enduring series in the slasher horror genre. From its first film in 1980 to its last chapter in 2009, it has made over 840 million dollars at the box office (adjusted for inflation).

I had never sat through an entire movie in the series besides Freddy vs Jason and was eager to binge my way through all 12 films. Jeremy, on the other hand, is a shameless fanboy who even reads the comics based on the iconic Jason character.

We decide to go head to head and rank these films from worst to best with a little help from our friend, Justin from the Talking Films Facebook page. Justin stands in as a referee as he tells each of us why we are right or wrong about our film choices.

It´s not long before fireworks are sparked as some films which rank the lowest for some are in the top five for others. Justin has his work cut out for him.

Also, if you missed our last podcast on the Halloween series than click on the link below and enjoy!!!

Here is a super condensed version of our rankings.

Friday the 13th (2009) – This is a formulaic movie with nothing new to offer. Jason is offbeat and too tall.

Jason Goes to Hell: The Final Friday (1993) – No Jason and too much mysticism, detracted from the bread and butter of the series, which is pyscho-zombie killer on the prowl.

Jason X (2002) – This is, essentially, “Jason In Space” with a cheesy terminator look and production design. 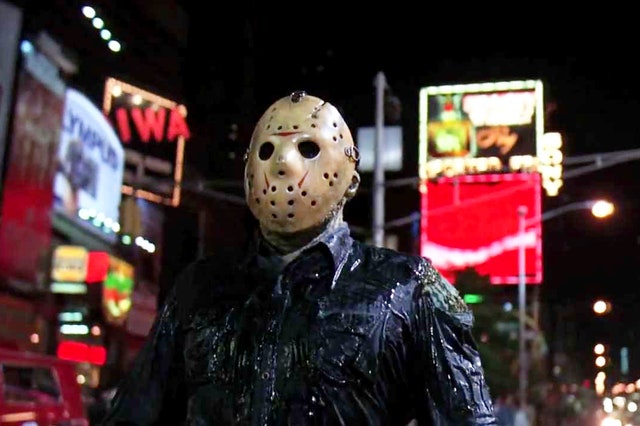 Friday the 13th Part VIII: Jason Takes Manhattan (1989) – Boring characters make this movie a drag. Also, Jason spends more than half of the movie on a cruise ship and not in Manhattan.

“Jason” breaks through a door in Friday the 13th V: A New Beginning

Friday the 13th Part VII: The New Blood (1988) – Jason vs Carrie is not that great, but it has some awesome kills and introduces us to Kane Hodder as the greatest Jason of them all.

Friday the 13th Part VIII: Jason Takes Manhattan (1989) – This movie is unique for having Jason on a boat instead of camp. It does have some funny cultural moments like kicking down a boombox that´s playing loud rap music and the shot of Jason in Times Square. But the characters are too one dimensional and come off as caricatures.

Jason gets a makeover in Jason X

Jason X (2002) – This movie was ridiculous and super campy, but it seemed to be in on the joke, so I laughed along with it. It has some cool kills and is pretty fast-paced. So, it never felt tortuously bad.

Friday the 13th Part 2 (1981) – Baghead Jason is too much like the killer in The Town that Dreaded Sundown in this film. There is also too much suspension of disbelief when it comes to the timeline. There are some nice cat and mouse chases, though.

Friday the 13th: The Final Chapter (1984) – Four movies in and I was already feeling a little bit of franchise fatigue in the repetitive nature of the storyline. The silver lining is that this movie does have some of the best kills and a truly vicious Jason.

Jason Goes to Hell: The Final Friday (1993) – This movie has too much Jason in spirit and not enough of him in the flesh. It does add nice touches by bringing out more of his mythology and showing how powerful he truly is while his spirit jumps from body to body.

Friday the 13th Part III (1982) – The disco theme and 3D novelty make this movie fun in parts, but it sort of drags on in the middle. It´s iconic for introducing the Jason mask, and I truly loved the last chase of the final girl.

Friday the 13th Part III (1982) – Iconic for having Jason put on his hockey mask for the first time. It gets some love for that.

Friday the 13th Part VI: Jason Lives (1986) – Too much comedy made Jason a little less threatening for me. He does go into supernatural boogie man mode, though, which is important for the series.

Friday The 13th (1980) – This is the one that launched them all and was clever in doing a whodunit with a mother as the killer. Mrs. Voorhees, played by Besty Palmer, carves herself a spot into horror history

Friday the 13th (2009) – This is an amped up version of the movies but doesn´t detract enough away from the original concept to upset me.

Friday the 13th Part VII: The New Blood (1988) – The birth of Kane Hodder as Jason is all I need to say about this one and why I rank it so high.

Kane Hodder in all his demented glory in Friday the 13th Part VII: The New Blood

Friday the 13th (1980) – Classic slasher mystery with a lot of gore and sharp turns. Mrs. Voorhees is one of the great horror villains.

Freddy vs. Jason (2003) – This movie wrote the blueprint for the big head to head of icons of their respective movie genres. Since it came out we have had Alien vs Predator, Batman v Superman, and await the upcoming King Kong vs Godzilla.

Friday the 13th: A New Beginning (1985) – Jason is not really in this movie, but I had fun with the over the top humour and characters.

Friday The 13th VI: Jason Lives (1986) – This movie launched Zombie-Jason and made him a supernatural force on par with Freddy. It´s a turning point for the franchise.

Freddy vs. Jason (2003) – Absolute camp, but with good laughs and great kills. The grudge match for the ages lives up to the billing.

Friday the 13th: The Final Chapter (1984) –  Tom Savini makes a comeback in the make up department and the difference is notable. Ted White gets the best reaction out of the characters as the most methodical, stalking Jason.

Jason jumping through a window to grab young Tommy, played by Cory Feldman

Friday the 13th Part 2 (1981) – Jason is the most vicious and relentless in this movie. He is out for revenge for the death of his mother and is not playing around. I enjoy the indie-realism of this entry. It truly made me jump in parts.

Well, that´s it, folks. I had a great time watching all of these movies for the first time and debating over them with both Jeremy and Justin. We all agreed on one thing, all of The Friday the 13th movies have at least something to offer in terms of entertainment and a few good scares. You have never seen any of these movies, do yourself a favour and watch one.

See how Jeremy and I rank the Halloween Franchise by clicking here.

See how Jeremy and I rank the Predator movies by here.

Find out a little about what´s going on in Brazilian politics by clicking here.

4 Responses to Ranking the Friday the 13th Movies: Phil and Jeremy go over all 12 films with a little help from our friend Justin.