Ranking the Predator Movies: Jeremy and Phil Go Down the List of one of Action/Sci-Fi´s Most Enduring Franchises

Predator, like its 80s brethren, Alien and Terminator, is one of those franchises that feels as if it has given all that it has to give. Yet, here we are in 2018 with another movie to add to the list of this ongoing saga of an interstellar hunter who happens to have a soft spot for Earth. Jeremy Wardi and I (Phil) are going to go down the list of our favourites.

Warning – there will be light to heavy spoilers for all the films including the newest entry to the family, The Predator (2018)

Also be sure to check out our podcast where we review the new film and go more in-depth on all the movies as we rank them.

But if you don´t have the time to listen now,  read on for the quick version. Predator movies ranked from worst to best.

This sequel to the original AVP: Alien vs. Predator is the worst of the series. It seems

indulgent to Predator and Alien battles which are cool in some glimpses but nearly throws the story down the drain. The script, set and actors feel B-grade and that self-indulgent ending of the fanboy filmmakers thinking it was something groundbreaking was silly.

Wow, this movie had so much going for it!!! It starts off mere minutes after the end of AVP: Alien vs. Predator and follows the story of the Alien-Predators hybrid. None of the characters are particularly interesting, none of the action sequences are particularly inventive and even the Predator looks bored as he tries to clean up the mess left by his fellow Predators.  This movie isn’t unwatchably bad but really has nothing about it which would make me go for a second view. It´s also really dark – good luck seeing either the aliens or the predator.

This movie was a mess. It felt like it was playing off of a Robocop vibe with its chaotic city streets overtaken by criminals while utilizing the same sort of pulp direction style but it doesn´t know how to balance that with interesting character development and action. By taking the Predator out of the real jungle and into Los Angeles, the element of the hunt is taken away. In fact, most of the movie The Predator is actually the one being chased, which totally neutered the character. Danny Glover is great, as usual, but every other character falls short of his ability to take the mediocre script and elevate it beyond 2-dimensional. The end sequence of this movie is pretty awesome as it adds to the universe mythos, but overall this movie is a mixed bag with too many rotten apples.

Danny Glover was in his prime but he just didn’t work as the Ahnuld-core protagonist fighting Predators. Even worse was that we got the Predator in the city, narrowing just how stealthy and scary it could be when compared to the jungle. Glover, Reuben Blades, and the rest of the cast were decent but the LA frenzy of post-riots used as the canvas for this alien race to hunt on seemed like a mismatch.

We´ve seen Predator in a jungle, Predator in a city and Predator against Aliens, this movie tries for something more expansive and it mostly delivered. Adrien Brody had the body but not the face for an action lead, and Lawrence Fishburne was not totally convincing as a crazy man for how intelligent he looks. Yet, the concept of Predators against Predators, and the sport of killing man, taken to a bigger scale put this movie in fourth place. I also loved the use of “predator” taken to symbolic meaning with the convicts delivered to the species to be hunted. It gave a Most Dangerous Game meets Hostel type environment. We also got what being a predator means broken down in different ways. Did you ever wonder who would win between a Predator and a Yakuza holding a samurai sword? I know I have and you’ll find out here. 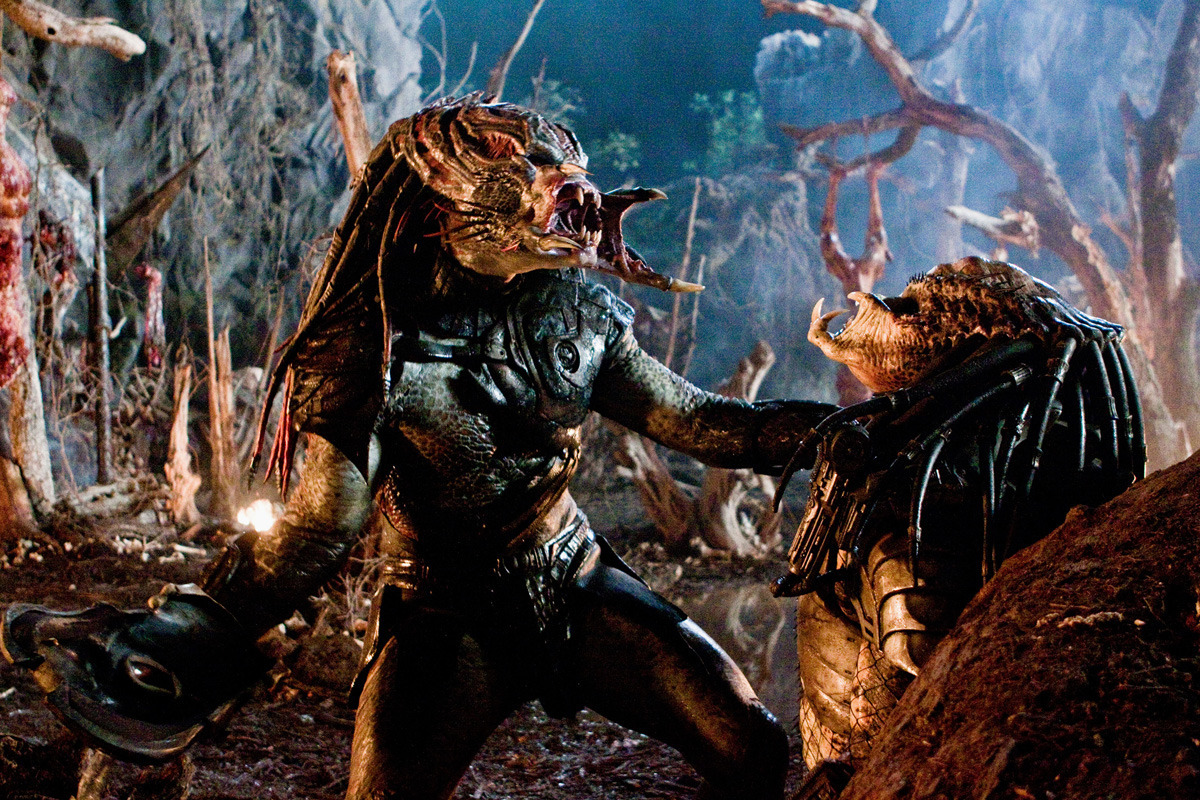 This movie’s biggest flaw is that it attempts to put together a mixed cast much in the same vein as the original film, but the characters aren’t as charismatic nor do they have as much chemistry with one another. It feels forced at all the wrong places. I was especially upset at Danny Trejo´s death being off-screen before we really got to know who he was. Another character’s sudden choice to go samurai sword fighting with a Predator makes for a great sequence, but again, without proper build up or rhyme or reason. More infuriating is the surprise appearance Lawrence Fishburn, that had the potential to take the movie into some really amazing directions, but ends as quickly as it began. This movie moves along at a great pace, though. It’s a definite throwback to the original while doing a great job at expanding on the mythos of the Predator franchise. What it lacks in heart it more than makes up for in straightforward entertainment value.

This movie is a mixed bag. It tries to take its subject matter a bit too seriously which takes away from the popcorn-fun core of the series. When it decides to focus on its main cast and their chase of and escape from the Predator, the movie clicks and delivers its fair share of action and gore.  This movies biggest risk was in trying to expand the Predator mythos. I think it did a decent job at that and made me want to see what else is in store for this universe. The characters were also amusing and gelled well with each other. If I ignore the parts where the movie tries to “science” itself into a pseudo-believable tale (much as the Alien franchise has attempted to do of late), I can appreciate it for what it is – a good enough entry into the film franchise.

This movie is ranked so high for me simply for, perhaps, topping the Freddy vs. Jason crossover from a year prior. AVP: Alien vs Predator also deserves the high marks for being legit and living up to the ad franchise crossover movie. You wanted Aliens fighting Predators and you got it in all its glory. The way the writers intermixed elements from both sides into one concoctive concept was brilliant. While this wasn’t a movie meant for thoughtful substance, it was a fun with action-packed delivery. In the end, the winner was subjective much like in the Krueger and Voorhees battle.

This is the second best predator simply because it is so experimental and game-changing with the tropes of the franchise. Incorporating Shane Black´s trademark action-comedy buddy formula with a Dirty Dozen set of commandos. The film makes you laugh as much as be in awe of its gore and action. Functioning as both a sequel and a reinvention, it explains most of the origins that started with 1987´s Predator while throwing in a The Day the Earth Stood Still-type of eco-premise. The predator hunting dogs are a little too similar to the creatures in Stranger Things, and sometimes the comedy intervenes, but this is a must watch for the franchise.

This movie is very much maligned by fans but I have always had a good time with it. It not only builds on the Predator mythology but manages to sneak in some background on Weyland Co. and what would become their undying interest in the serpent alien species. The action sequences are compact and believable, and the characters are only less likable than the original group of Predator-prey. Saana Latham, who plays extreme geo-guide Alexa, also manages to hold her own and gain the respect of a Predator. She becomes an unlikely action hero before the current push for more women heroes on screen. AVP: Alien vs Predator has a simple goal – entertain and provide a classic showdown between two sci-fi screen giants. It succeeds in its goals while adding more layers to the Predator mythology. If we don’t stop to analyze the film for much more than that, we can come away happy. Plus, the final battle with the Queen Alien rivals even Cameron´s classic Aliens climax.

This is the one that started it all. Ahnuld and Carl Weathers in their prime. Then we had Jesse Ventura’s unforgettable “I’m a sexual Tyrannosaurus” line. Not to leave out Apollo Creed dying after he died in Rocky 4. While this is the one that started the franchise, it’s still the best of the bunch for keeping the title species in their most primal habitat being the jungle. It’s a canvas that forever allowed that holographic stealth mode or the camo-vision to be mimicked for years to come. Few films can initiate with Terminator, Apollo Creed and Jesse “The Body” in badass commando mode only to lead them to something even more intimidating than their macho-status.

This movie is a classic. It meshes the 80s guerilla-war/action genre with sci-fi/horror seamlessly while managing to make a super simple and by-the-numbers plot feel original and fresh. The hunter is hunted with a last man (and woman) standing. Arnold shows all his star power and The Predator becomes an instant sci-fi icon. The jokes are off colour and the movie is definitely marketed as a “man movie” but it has so much fun with itself that it doesn’t for one-minute feel dated or make you cringe. If you don´t make it a point to watch any of the other movies on this list. Watch this one!

Check out how I rank the Jurassic Park films by clicking here.

Look at how I rank the A Nightmare on Elm Street movies by clicking here.

Check out what I am reading by clicking here.

3 Responses to Ranking the Predator Movies: Jeremy and Phil Go Down the List of one of Action/Sci-Fi´s Most Enduring Franchises