What I am Reading: True Grit 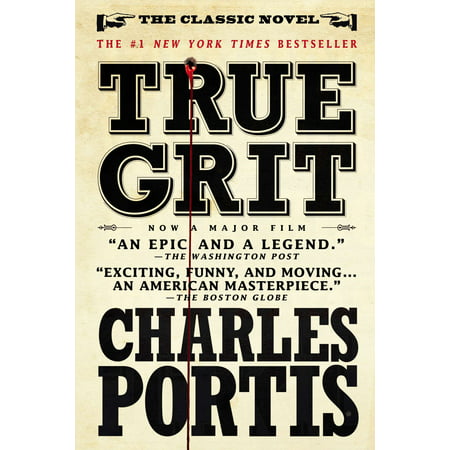 I have a thing for strong female characters, especially when they have to weave their way through a man´s world to get what they want. The main character in True Grit, 14-year-old Mattie Ross, is a shining example of one literature´s finest. She is scrappy and tenacious, but in a much more straightforward way than say, Jean Louise Finch, who is more a spectator than an agent for setting the plot into motion.

Many of you have probably seen both Hollywood versions of this book (strangely, I have not) so I won´t bore you with all the details of the story. The short version is that a drifter, named Tom Chaney, kills Mattie´s father during a barroom quarrel. She seeks recompense and so goes into town and hires a mean-old drunken US Marchal, Reuben J. “Rooster” Cogburn, to help her on her quest. They are later joined by a Texas ranger, named LaBoeuf, who happens to also be looking for Cheney for a the killing of a senator and his dog in Texas.

At first both men don´t take a liking to each other but do agree that Mattie should stay behind. Her tenacity pays off as she continuously manages to stay on their trail even when they try to lose her along the way to finding Cheney.

The story is pretty straight forward and simple and the inevitable respect that all three eventually garner from one another is expected. What makes the book special, is the characters themselves.

Mattie is tough as bricks. Cogburn has seen better days but still has the heart of a lion hidden under his overweight shell. LaBoeuf is experienced but learns to accept the absurdity of his two companions.

True Grit is exactly about exactly what the title says – finding grit in impossible odds. It is at these moments that we learn who we truly are and how far we are willing to go for justice.

The book did not leave me philosophizing about life, but it gave me a rush of energy as I cheered for our heroes. It is written in simple terms and one can see why Hollywood picked up on it for its very cinematic-adventure style. The one lull for me was in Chapter 3 where Mattie introduces Cogburn by way of a court transcript – she had met him on the day he was serving as a star witness for the prosecution in a trial. The shift in style (written as if it were dialogue in a play) is a bit jarring and derailed the narrative flow. Once that matter is out of the way, the book delivers until its final pages.

If you have seen the movies and want to run through a light, but entertaining, book, I recommend True Grit. As for me, time to check out those movies.

If only movies are your thing then check out Talking Films.

Check out my thoughts on the end of The Walking Dead comics by clicking here.

Check out my reviews of The OA: Season Two, Shazam, and others by clicking here.

Read about my Sopranos rewatch by clicking here.

Want some Netflix shows to check out? Click here.

1 Response to What I am Reading: True Grit