What I am Reading: The Walking Dead Comics Come to an End 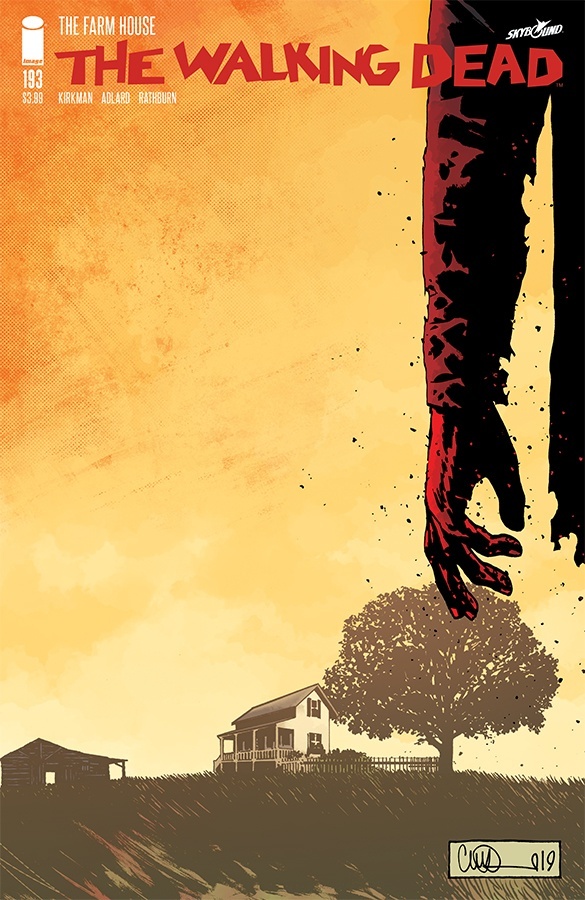 The Final Issue of The Walking Dead: The Farm House

I began reading The Walking Dead comics during the break from seasons 4 to 5 of the television show. And just as I had binged my way up to season 4 (I got turned on to the show late) I binged my way straight up to Negan and All Out War in the book.

I have read a lot of comics in my life, but I had never read anything quite like The Walking Dead. In those black and white pages, I found characters and stories that kept me up into the wee hours and gave me nightmares. No lie! Negan haunted my dreams for a few weeks.

The Whisperer arc that came after All Out War felt a bit anti-climatic at first, but in the end it exploded into something even bigger and more epic than anything the comic had put out before. My only criticism is that I did feel that it ended a bit abruptly. The death of Alpha is something I hope the television show skips, as she is being portrayed as much scarier villain on television.

Most recently, the New World Order story seemed to be the one which would expand the universe beyond the area in Alexandria, where our heroes had been stationed for years, and show us communities which had managed to grow to the size of small cities. Perhaps we would finally see how the rest of the county or even the world was dealing with the zombie apocalypse. Yet, it is there that The Walking Dead comic book series came to a sudden end.

Excerpt from Kirkman´s letter. NO WAY OUT was the planned end for the comic.

Robert Kirkman wrote a lengthy letter at the end of the last issue explaining that he had been planning to surprise us with this end for quite some time. Furthermore, he admitted that he had actually considered ending The Walking Dead as far back as when they had first arrived in Alexandria (pre-Negan!!!). Fortunately, back then he realized he still had more story to tell, but he made it clear that this time around he did not.

The right decision was made, though. I think that many fans, including myself, felt that the series was stalling a bit, not knowing exactly where to go with the new cast of characters and location. I feared that at some point the comic book was in danger of running into the same problem that the television show has run into on more than one occasion – repetition. I had already felt that Negan was a redux of The Governor (just much more epic and fleshed out), so for us to have to sit through our heroes once more encountering a group who may or may not have good intentions, only to then have our heroes take over that community, did not feel as exciting as the first dozen times they did the same thing.

The New World Order story was also taking its time to develop. The Commonwealth´s only threat is that it believed in some retrograde-meritocracy i.e. if you were wealthy, successful, and powerful in the old world, you would be wealthy, successful, and powerful in this one.  Rick´s company did not agree with this, as his version of meritocracy only rewarded people for their capacities in the new world.

Would The Walking Dead turn into a political drama? The arc sure did seem to be moving in that direction: there were popular protests and uprisings and assassination attempts (funny, how bad news follows our heroes). Thing is, I love political intrigue, I am just not sure Kirkman was the most talented guy to write it, nor that it was something worth waiting a month to get more of.

New World Order climaxed with attempted coup of the Commonwealth and a near battle with Rick´s community (with a horde of Walkers thrown in the mix for extra drama). It all ended peacefully with Rick giving another rousing speech in which he declared that “We Are Not The Walking Dead” – a clear call back to when he stated that they were the walking dead.

As I was reading, I did get a feeling of closure. Fortunately for us, Kirkman must have felt similarly, so, Rick was promptly assassinated in cold blood, and the following issue took us into a time jump to end a story that took nearly two decades to tell.

Was it abrupt? Yes! Was it less than satisfying? Yes! But was it fitting? Yes!

There are only so many ways you can tell the same story again, and Kirkman had already done it in every imaginable way. Drama needs conflict, and the only real conflict that matters in a dystopian world is the “civilized” vs the “anarchist” or “totalitarian”. There are not that many variables. Everything from The Walking Dead to Mad Max to even The Handmaid´s Tale operates on that level. Going that route again with The Commonwealth would have been predictable and boring.

While the comic book did its best to keep us guessing about the true nature of the Commonwealth, it made the right choice of not making it anything more than just a bit of class struggle/criticism. Anything else would have been redundant.

Although I was not exactly excited or touched by the last chapter of The Walking Dead, I believe that it ended in the most resolute way it knew how. This was Rick´s story after all, so it made sense to end with his death and his legacy.

I also thought it just for the story to end on a high note. Kirkman stated in his letter that his first ending was dark, with the Dead winning in the end, and that in hindsight he made the right decision in flipping that outlook around. This ending was hopeful but not in a sugary way. It was simply realistic: people banded together and got on with their lives while others did not adjust to the new world and still resented the past.

The Walking Dead comics will be missed. The universe still lives on in two AMC shows – with season 9 of the original show being one of the best it has put out in years. I would suggest that the television version begins thinking about its own end-game, too. It´s sad to see a story we love come to an end, but it´s not as sad as seeing it stick around for longer than welcomed.

Thanks for the great adventure, Robert Kirkman. Until next time.

If only movies are your thing then check out Talking Films.

Read my review of Season Nine of The Walking Dead here.

Check out my ranking of the 2019 Oscars by clicking here.

Check out my reviews of The OA: Season Two, Shazam, and others by clicking here.

Read about my Sopranos rewatch by clicking here.

Want some Netflix shows to check out? Click here.

2 Responses to What I am Reading: The Walking Dead Comics Come to an End