I caught wind of last year’s runaway hit, the Duffer Brother’s Stranger Things, through word of mouth. It took me just one rainy day to get through the eight chapters. I was anxious to hear word on season two but at the same time, I had my trepidations.

What made season one so unique was the call back to the 80s. It’s also what made it a bit gimmicky in parts. The middle of season one had quite a few sections that dragged on a bit longer when the focus went away from the main storyline and the 80s touches. Still, the Duffer Brother’s managed to keep a decent pace which made even the less interesting episodes entertaining. I wondered how they would manage to keep the second season exciting while not repeating themselves. The show would have to grow beyond “That 80s Show” gimmick and universe-build to top what they did the first time around. So, did they manage it?

Well, I  watched all nine chapters of Stranger Things 2  on its premiere date and my verdict is – yes!!!

Now, this is not to say season two definitely felt like it was on wobbly legs on more than a few occasions, but like season one, it felt very certain about the story it wanted to tell and drove it forward enough in each episode to keep me clicking “next episode”.

Season two starts with a bang. It doubles down on trying to build a universe outside of Hawkins, Pennsylvania with a car chase in Pittsburgh, Pennsylvania and whole new cast of actors who look like they stepped straight of a Charles Bronson Death Wish movie. 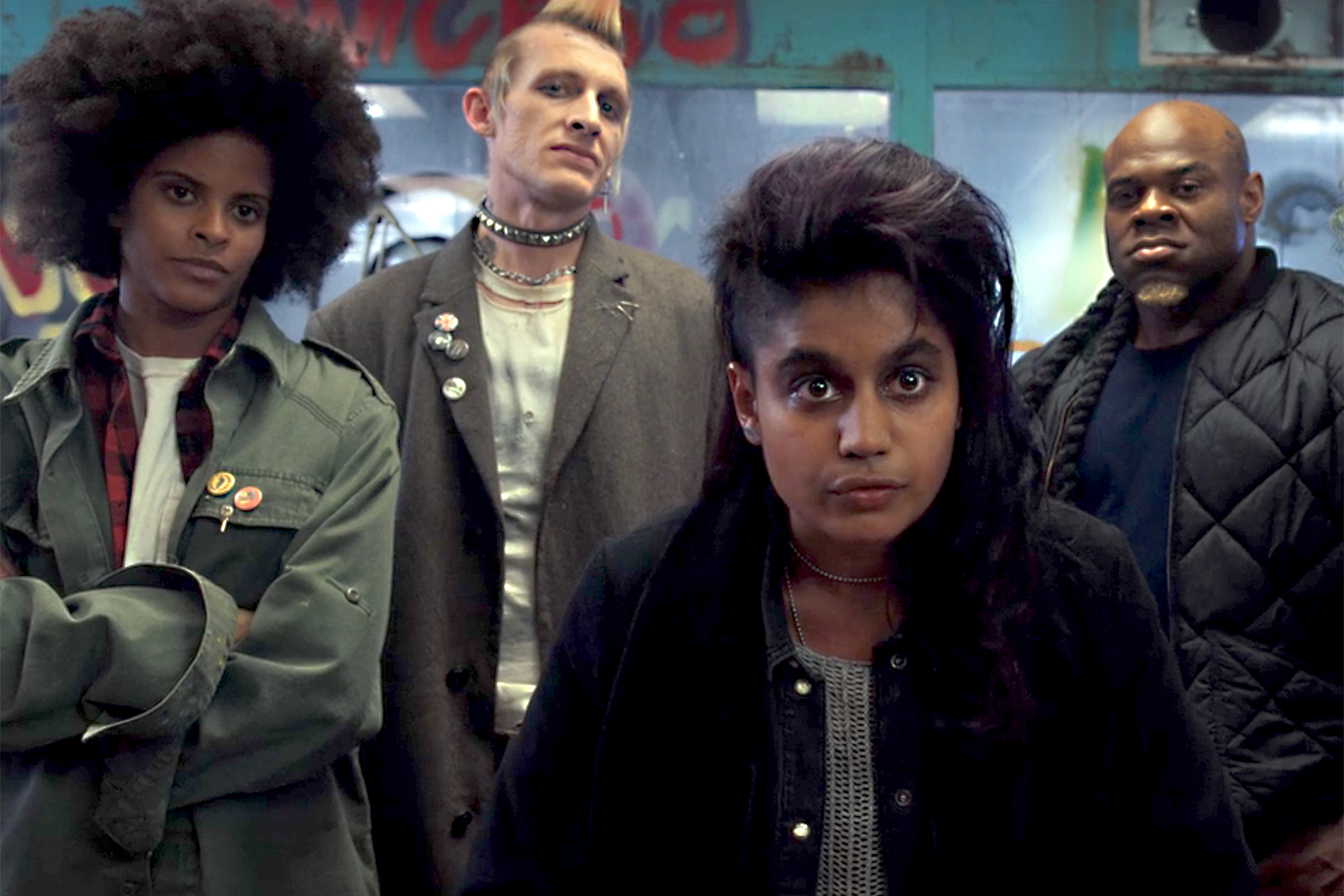 This is a cool little opener which left me wondering how these characters would come into play in the story – it would take until episode seven for that. After the opening credits, we are instead quickly taken back to familiar turf – Hawkins.

I liked that the show wasted little time in letting us know how everyone was – including Eleven (although I must admit that the result of her trip to The Upside Down was a bit anti-climatic – more on her character soon). And although everyone’s state is firmly established within the first episode, this season takes a little more time to get the central storyline going than last year. It wasn’t until about episode four (after Dustin’s little pet, which he conveniently finds in his trashcan, begins to grow) that I felt I was starting to really get a grasp of where they were going with the story – and the pace picks up.

It was clear from the Twin Peaks-esque season one cliffhanger (and what the Duffer Brother’s themselves have said) that The Upside Down would play a larger part in season two, but it wasn’t as plainly drawn out as Mike’s disappearance in the first episode of season one – which essentially put the plot of the show into motion. 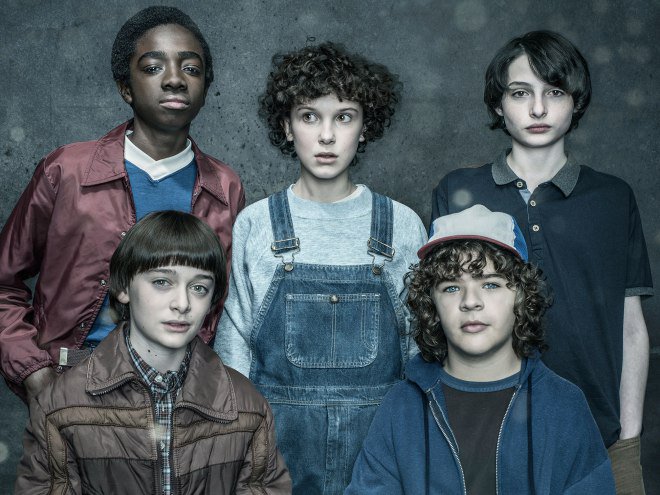 The kids are back from top left clockwise: Lucas, Eleven, Mike, Dustin and Will

And that is where Stranger Things felt wobbly. The showrunners demonstrated last year and again this year that they really struggle when they have to flesh out believable scenarios outside of the main plot.

An example of this is the introduction of the new character, Max. While she certainly held her own among the original four boys playing the role of the “new mysterious girl” much in the vein of Eleven, the payoff to her mysterious background was not nearly as satisfying as the former’s. She was most interesting when there was less focus on her backstory and she actively participated in the adventure at hand. The older kid, Billy, that she shows up in Hawkins with, also felt like he was being built up to be a tragic hero in the vein of The Lost Boys – but the resolution to his arch and the revelation of his and Max’s past felt like wasted screen time.

The worst victim of universe-building was, unfortunately, Eleven. She went from being the strongest link in the series last year to the weakest link this year. First, as I mentioned, Eleven’s trip into The Upside Down from last season’s finale felt like a wasted sacrifice given how anti-climatic (and quickly) that arch was resolved. She then goes on a season-long journey of self-discovery which leads her very far from Hawkins but adds very little to her character – other than the very cliche realization of knowing where home really is.

More frustrating (without giving too much away) is that a segment of this journey, which takes up all of Chapter Seven, felt more like a propaganda for a spin-off series than anything that she seriously needed to do in order to come back to her senses. Although I understood the necessity for this arch on an emotional level for Eleven (after all she has many demons to deal with), I felt the execution was poor and she didn’t have enough chemistry to hold her own without the help of the main cast.

Yet, despite these narrative shortcomings, which are basically the same narrative shortcomings of season one, Stranger Things (again, like in season one) seems to understand itself better than anyone else. Even while these seemingly loose threads were being introduced into the story, they never felt completely out of place – and most importantly, while they flirt with feeling longer than necessary, they usually don’t overstay their welcome before we are back to the main storyline.

And the main storyline is what keeps Strange Things 2 afloat. Despite taking a more roundabout approach, we eventually start to understand the implications of Mike’s visit to The Upside Down and what terror that dimension brings with it to our own world. Soon, everyone is on board in their attempt to stop The Upside Down from implanting itself firmly on our plane of existence.

Another thing I loved is how, (unlike season one), season two is actually a bit more adult and even scarier. The Duffer Brother’s did well in laying off as many cute 80s references and letting the story develop for itself, especially since this year we already had IT give us a dose of 80s nostalgia. There were scenes in The Upside Down and a very intense Exorcist-like bit at the end that had my heart racing.

So, although it takes season two a bit longer to get going and a few of the side-ventures felt unnecessary, Stranger Things 2 delivers on its promise to be bigger and better. This felt much more like its own show than last year’s gimmicky “lighting in a bottle” hit, which had one-hit wonder written all over itself.

Grab the popcorn and sit back because Stranger Things 2 is probably better than most that Hollywood has been able to offer this year in the shocks and thrills territory on nearly every front.

Thanks for reading. Leave your comments and opinions below.

Read my review of IT  by clicking here.

Read my countdown of the best A Nightmare on Elm Street movies by clicking here.

Read my review of Star Trek: Discovery by clicking here.

This entry was posted in Uncategorized. Bookmark the permalink.